in cooperation with the Natural History Museum Karlsruhe (SMNK) 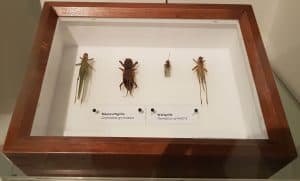 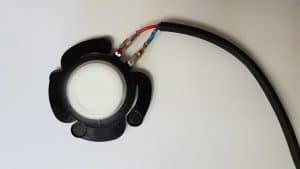 Insects have existed on our planet for millions of years, including the large family of (hay) hornets, whose species are distributed worldwide. Across cultures and continents, chirping is known as a transcultural language, so to speak. By stretching the sound, the sound microcosm of chirping becomes audible. The composed sound microscopies become audible through sound transmitters, so-called transducers, which stick to the gallery shop window, through the glass pane on the street as well as in the gallery space.

An animal exhibit showcase of the Museum of Natural History shows (hay) terrors, whose sound microcosm can be heard on the glass pane.

Sabine Stern’s own texts contextualize the ensemble and can be heard via QR codes on the installation.

Posted on December 28, 2019 by Philipp Berdesinski. This entry was posted in latest. Bookmark the permalink.