The space-sound installation TopoPhonicPlateaus is a walkable sound-light-body, whose acoustic and optical states are constantly changing. Electroacoustic sound, instrumental sound, human voice and noises (consequently any audio material) are interwoven, creating a complex linguistic character that makes the boundaries fluid, situated between traditional genres such as electronic music, radio play or “musique concrète”. 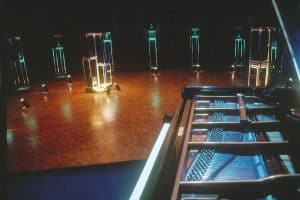 The texts used are taken from Nächte und Spindeln by Jochen Beyse and Gödel, Escher, Bach by Douglas R.Hofstadter. Inspired by Hofstadter’s transformations of contrapuntal principles to the text design, the linguistic material is primarily subject to musical criteria in the design of polyrhythmic surfaces, counterpointing linguistic melodies and repetitive structures; linguistic syntax and semantics are thus dissolved in sound. 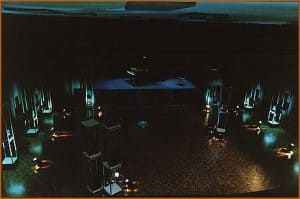 As the only acoustic instrument, the computer-controlled concert grand piano occupies an exposed position within the spatial sound installation. In addition, the computer control allows the programming of passages unplayable by humans on the piano, which at times give rise to affinities with electroacoustic music – for example, when glissando lines sound in the ppppp that are more reminiscent of a soft whirring of an electronic sound tape than of a piano sound.
Through the digital synchronization of the grand piano with the loudspeaker installation, the heterogeneous levels combine to form a common “playing” body of sound. The loudspeaker ensemble with the concert grand piano and the light staging create sound-light territories, open up new scenes again, form metamorphoses. They change, coupled with each other, fluidly and rupturiously – design complex worlds of fleeting acoustic and optical impressions of the outwardly folded thinking spaces. 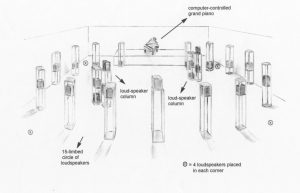 Arrangement of the loudspeakers and the concert grand piano

The sound installation consists of a 27-member loudspeaker ensemble combined with a computer-controlled concert grand piano. The loudspeaker ensemble has three components:
1. an outer circle – formed by 15 loudspeakers – starting at the right edge of the stage and ending at the left edge of the stage. The loudspeakers are positioned in a successively increasing and decreasing height.
2. two columns – formed by 4 loudspeakers each – positioned in the interior, facing each other. The speakers are staggered in height position.
3. four Aura boxes, each placed on the floor in the corners of the room. This group of loudspeakers places sound fundamentals in the room or transmits the bass frequencies.
The computer-controlled concert grand piano is located on the stage. It is synchronized with the loudspeaker ensemble via a computer. The Bösendorfer computer grand piano is used for the performance.