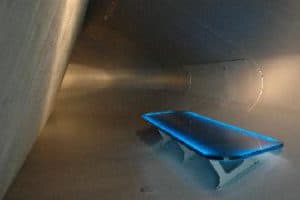 The space-sound installation TopoSonic Tunnel by the artist-couple <SA/JO>, conceived specifically for one fo the most extraordinary architectonic zones in phaeno, Hadid’s visionary architectonic landscape functioning as a congenial resonance space, again focuses on the normally inaudible and thus to this day almost completely unknown acoustic microdimensions of natural sounds and noises recorded in the animal kingdom, in nature and in everyday human environment.

Even basic physical phenomena such as time, space and movement are shaped, in this work, in a purely artifical way and thus made experienceable „just by listening“ as elementary and, at the same time, universal features.

Thanks to a computer supported digital PA system based on the principle of the bending wave – recently and innovatively developed by Siemens AG/“puren” –, it was possible to distribute the Space-sound surfaces at will and to integrate them invisibly in the walls, thus creating the impression of being surrounded by multiply moving Space-sounds practically coming out of nowhere.

The Science Centre phaeno calls itself experimental landscape, where scientific phenomena are experienced in a sensual way. This corresponds to the approach of the artist duo in making the acoustic microcosm of natural sounds and noises audible (which are not perceivably before). The artist duo created a permanent spatial sound installation for the collection of the art sites of phaeno.

„Biological hybrid….The magnification [of the sound material] allows the audibility of the clear sound process. It resembles a trip through a fractal sound picture and its endless structural similarity. For those who are inclined to listen accurately, a secret revealed that holds the world together through its rhizomatous twists and turns. ….“